Tomorrow Sex Will be Good Again

April 5, 2015 · by Tony Cotrupi · in religion and spirituality · Leave a comment

I’m finding that once you get past the small stuff, what people really want to talk about are their relationships. The single are anxious to find that right person, and fall in love. The married are anxious to stay in love. And everybody is anxious about the future.

There is a distinct uneasiness with the present moment, a constant “looking ahead” and reluctance to look back. Out and about, at parties, in class, at work, and even when surrounded by family and those closest to us, we compulsively check our devices.

It’s as if none of us are completely comfortable where we really are.

The present does not satisfy, for long. So we look to the future. We’ll be happy then.

As I talk with friends who have been through the trauma of divorce, and think about my own trials and tribulations over the past thirty years, it’s clear this phenomena of “perpetual dissatisfaction” has wedged itself deeply into marriage and family. When I reflect on my own moments of weakness and frustration, they typically involved accepting three myths (as truths):

How did I get here? And when did it become all about me?

Much has been written about the increased self-absorption in our culture, but few have analyzed the ramifications as adeptly as Christopher Lasch. In his book “The Culture of Narcissism: American Life in an Age of Diminishing Expectations,” he breaks down the first 300 years of American history into our evolving concepts of “self.”

For the Puritans in the early 17th century, “a godly man worked diligently at his calling not so much in order to accumulate personal wealth but as to add to the comfort and convenience of the community.”

In the 18th century this was replaced by a more distinctly Yankee ethic. “The Yankee stressed self-improvement, yet he understood self-improvement to consist of more than money making. This important concept also implied self-discipline, the training and cultivation of God-given talents, and above all the cultivation of reason.”

In the nineteenth-century, we began to edge inward: “Formerly the Protestant virtues appeared to have an independent value of their own. Even when they became purely instrumental…success itself retained moral and social overtones, by virtue of its contribution to the sum of human comfort and progress. Now success appeared as an end in its own right, the victory over your competitors that alone instilled a sense of self-approval.”

And today? My generation, weaned in the “self-actualization” and ongoing sexual revolution of the 70’s, 80’s and 90’s, has narrowed its focus considerably. No longer constrained by basic issues of security, health or material comfort, many of us were free to become self-absorbed. Ours was perhaps the first generation in history to see every endeavor – career, family, community, etc. as opportunities to “find ourselves” and “realize our human potential” as opposed to fundamental responsibilities. Lasch’s description of the “new narcissist” isn’t pretty, but sounds familiar:

The new narcissist is haunted not by guilt but anxiety. He seeks not to inflict his own certainties on others but to find a meaning in life. Liberated from the superstitions of the past, he doubts even the reality of his own existence. His sexual attitudes are permissive rather than puritanical, even though his emancipation from ancient taboos brings him no sexual peace. Acquisitive in the sense that his cravings have no limits, he does not accumulate goods and provisions against the future, in the manner of the acquisitive individualist of the nineteenth century political economy, but demands immediate gratification and lives in a state of restless, perpetually unsatisfied desire… The ideology of personal growth, superficially optimistic, radiates a profound despair and resignation. It is the faith of those without faith.

In the new order, the lessons of our parents and grandparents became irrelevant. The notion of sacrifice less compelling.

Their ideal of marriage as an unbreakable covenant; that children are a gift from God to be treasured; that God is to be loved, revered and even feared; that work is meant to feed the family, not compete for its attention; and that sex is the sacred provenance of marriage, designed for both pleasure and procreation but in a unitive – as opposed to selfish, individualistic way. These beliefs were discarded, offering little value to serious people other than as perhaps a chance to reminisce. Lasch continues:

A society that has made “nostalgia” a marketable commodity on the cultural exchange quickly repudiates the suggestion that life in the past was in any important way better than life today. Having trivialized the past by equating it with outmoded styles of consumption, discarded fashions and attitudes, people today resent anyone who draws on the past in serious discussions of contemporary conditions or attempts to use the past as a standard by which to judge the present.

Clearly, previous generations did not live perfectly. And Lasch does not believe the answers to today’s challenges lie in reverting to 17th century Puritanism. But he does suggest we be more critical when assessing precisely what elements of progress represent “progress,” as opposed to simply another, more devious form of yoke.

Nowhere has the yoke swung more violently, and to questionable effect on relationships, than the topic of sex.

Michel Foucault, the French philosopher and historian, was an admirer of the avowed atheist Nietzsche and a favorite of intellectuals in the seventies and eighties. He practiced what he preached – a very open, exploratory approach to sexuality, and was a prolific thinker and writer. His “repression hypothesis” studied the extent to which our ideas about sex have been used by the powerful to exert power and control. In “The History of Sexuality: Volume 1,” released in 1976, he correctly posited that a “new” sexual order had assumed power and was exerting it just as forcefully as the old:

Today it is sex that serves as support for the ancient form – so familiar and important in the West – of preaching. A great sexual sermon, which has had its subtle theologians and its popular voices – has swept through our societies over the last decades; it has chastised the old order, denounced hypocrisy, and praised the rights of the immediate and the real; it has made people dream of a New City.

Unfortunately, and despite our enthusiasm for revolution, this “New City” has not been realized. We are arguably more lost than ever. And even the progressive Foucault acknowledged a suspicion that the promises of today’s “sermons” may be as illusory as those they replaced:

Something that smacks of revolt, of promised freedom, of the coming age of a different law, slips easily into this discourse on sexual repression. Some of the ancient functions of prophecy are reactivated therein.

Tomorrow sex will be good again.

Tomorrow is here, but is sex good again? Or does it remain just beyond our grasp?

And what is it about contemporary life that makes it so difficult to find peace? Could it be that in our headlong pursuit of self we are chasing all the wrong dreams?

Forget the new prophets and their sermons. I’m gonna ask my parents what they think. 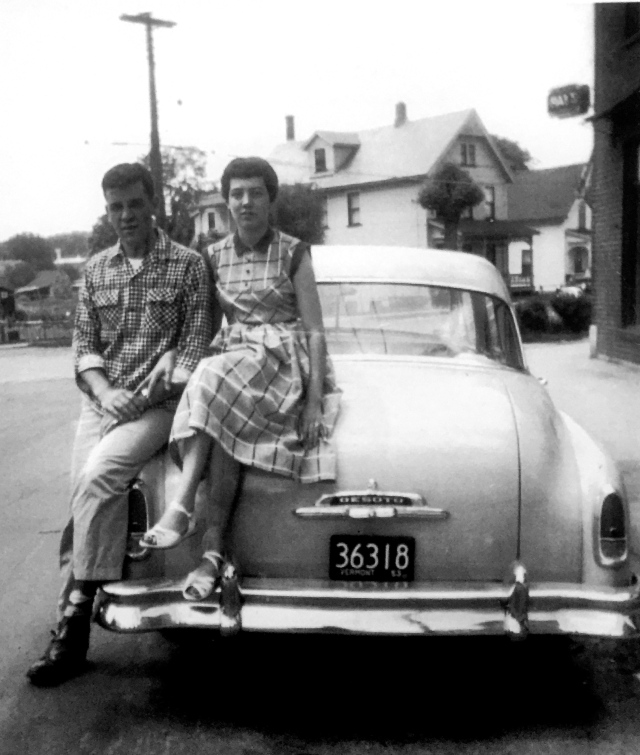 The author’s parents in 1954. Seven children, eighteen grandchildren and nine great-grandchildren later, they celebrate their 60th anniversary in July. They feel no need to read Lasch or Foucault.

← The School of Love
Hope Springs →